Start a Wiki
Yua Bateson is a character in Breath of Fire II. She is the daughter of Ganer and Valerie Bateson, and the younger sister of Ryu. Following a key moment in Ryu's childhood, she and her parents mysteriously vanished. Years later, Ryu encounters Patty the Phantom Thief, a fellow member of the Dragon Clan who shares many characteristics with Yua. While it is never overtly stated in the game's original English translation, it is heavily implied that Patty is the teen-aged Yua. In the years since the game's release, supplementary materials such as the Breath of Fire Official Complete Works, have confirmed that they are indeed the same character.

At the beginning of the game, Yua runs away from her father, and Ryu is tasked with returning her home. Yua is found in front of the dragon that saved the village. After Ryu and Ganer defend her from a monster, she tells them that she wanted to see her mother again, that she comes into her dreams when she takes a nap here. Ganer takes Yua home while Ryu naps near the side of the mountain to see if his mother will visit him in his dream as well. When he wakes, he returns to town only to find that Yua and Ganer have vanished and none of the townspeople have any recollection of him or his family.

Ten years later, Ryu and Bow are working for the Rangers Guild in HomeTown. When Patty steals the Magic Hood from the private collection of a wealthy citizen, Bow is presumed to be the culprit due to his being at the crime scene. Ryu determines to track down Patty, in an attempt to prove Bow's innocence.

After several adventures, Ryu eventually encounters Patty at SimaFort, where she is being forced to work in the kitchens as punishment for attempting to steal a royal heirloom. After Ryu unmasks and defeats Kuwadora, he is allowed to take Patty back to HomeTown in order to finally clear Bow's name. The party drops her off at Trout's manor, but later free her when Trout is revealed to be a demon.

As the party encounters and defeats an increasing number of demons, they meet a resistance group claiming that the influx of evil creatures are connected to the Church of St. Eva. Ryu and his friends help Patty, now acting as the Resistance's sponsor, steal an artifact from the Thieves' Tomb in order to provide the group with funding.

When Habaruku, the high priest of St. Eva's Church, tries to destroy the dragon in Gate, Patty tracks Patty to Township and informs her of the situation. Patty races back to Gate, to check on the dragon's safety. Habaraku then reveals himself to be a demon working on behalf of the archdemon Deathevn, whom the world's populace has been tricked to worshiping as the god St. Eva. He attempts to kill Patty, as the seal can only be broken by the death of a member of the Dragon Clan. Patty screams for her brother to rescue her and vanishes into the forest as Ryu defeats Habaraku.

In the Gameboy Advance rerelease of the game, the game's ending sequence closes with a picture of Patty, still hidden in the forest, staring at the town of Gate below her.

Like her mother and Ryu, Yua has blue hair. As she grows older, she develops the dragon-like wings common among the females of Breath of Fire II's Dragon Clan.

As a child, Yua is energetic and strong-willed. She has a habit of running away when she doesn't get her way and Ryu often has to chase her down. Yua possesses an even greater reckless streak as an adult. 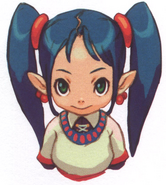 Add a photo to this gallery
Retrieved from "https://bof.fandom.com/wiki/Yua_Bateson?oldid=34829"
Community content is available under CC-BY-SA unless otherwise noted.