Wyndia, also known as Winlan or Windia, is a recurring kingdom in the Breath of Fire series. It is the home of the Wing Clan, including the various incarnations and Nina and is typically depicted as a major world power. Its city is usually situated at a high elevation, which allows it to benefit from the high winds which power its windmills and earning it the nickname "the town that leads to the sky." Wyndia has appeared in every installment of the series except for Dragon Quarter.

After destroying the Quake Control and saving Nanai, Ryu travels to Wyndia (referred to as Winlan in this game) in an effort to reach the southern continent. Around this same time, the King of Wyndia is poisoned by the Wizard of Karma. Ryu's stay at Wyndia Castle coincides with Princess Nina and two soldiers embarking on a covert mission to retrieve the poison's remedy from Karma Tower. However, the Wizard uses Xeon gas -- a chemical agent that is only effective against members of the Wing Clan -- to capture Nina and one of the soldiers. The other soldier is able to escape, return to the castle, and spread word of the princess' capture. The remaining Wyndian soldiers mount a rescue mission and ask Ryu to accompany them, knowing that, as a human, he will be resistant to the effects of the Xeon gas. Ryu successfully defeats the Wizard and saves Nina. The two of them then deliver the Remedy back to Wyndia Castle where the King is able to make a full recovery under its effects. Nina then determines to accompany Ryu on his mission to defeat the Dark Dragon Clan, who were in league with the Wizard. The King grants this plan his blessing. During the game's ending, Nina returns to Wyndia and her father.

Several years before the events of the game, Nina, the elder of Wyndia's two princesses, develops black wings. According to an ancient prophecy, this means that she will cause the kingdom's destruction, unless she is killed first. Disbelieving the prophecy, but afraid of the public's reaction, Nina's parents stage her death and send her to live in hiding HomeTown, where she studies at the Magic School under the tutelage of Master Yoji. Although the general public is unaware of Nina's continued existence, she maintains contact with her younger sister Mina, whom is not fully aware of the reasons for Nina's exile. When Mina is eventually kidnapped by the Joker Gang, the party assists Nina in rescuing her. They then escort Mina back to Wyndia and Mina is surprised when her mother refuses to acknowledge Nina as her daughter. While still in Wyndia, the party meets Sten, a travelling performer. He immediately becomes smitten with Nina and Katt and accompanies the party on their travels, despite the team's misgivings.

As the game progresses, the party increasingly suspects that St. Eva's Church is actually a front for a demonic cult. This culminates in the abduction of Daisy Marks, who is being held at the church's island headquarters. Knowing that the party must unmask and destroy the church at all costs, Nina suggests that they return to Wyndia so that she can undertake the trial of the Great Bird. When the party arrives back in Wyndia, Nina learns that her father is gravely ill and he finally reveals to both his daughters the full circumstances leading up to Nina's exile. While the revelation proves cathartic for Nina, Mina is hurt by the fact that she had been kept in the dark for so long. Nina successfully completes the trial, and one of her ancestors explains to her why her people lost the power of the Great Bird in the first place. That night, Mina sneaks out of her room and permanently transforms herself into the Great Bird, so that her sister can continue to fight alongside the party.

Ryu first arrives at Wyndia as a prisoner of Balio and Sunder. He is brought before the King as a captured dragon, but when he reverts to his human state, the King has all three imprisoned for their deception. Nina takes pity on Ryu and sneaks into the dungeon to free him. However, Balio and Sunder deceive her into releasing them first, and then immediately kidnap her for ransom. Ryu forces his way out of his cell and battles the kidnappers, allowing Nina to escape. She helps Ryu make his way through the castle's catacombs and locate Rei and Teepo. This leads to them playing hide-and-seek with Bais, Lang, Lee, and Wynn in exchange for information.

Eventually Ryu and Nina return to Wyndia in order to obtain the passports necessary to cross through the Eastern Checkpoint. Nina explains to her father that Ryu saved her, and a banquet is held in their honor. The King commends Ryu's bravery and authorizes the passports, however Nina's mother forces her to stay behind at the castle. However, Nina soon encounters the robot Honey. When Honey is damaged, Nina sneaks out of the castle and takes her to Ryu's camp for repairs, rejoining the party in the process.

After solving the problems at the plant, the party revisits Wyndia as adolescents. Rei is granted a passport by the King, however when he reveals that he is a travelling companion of Ryu's the King tries to have him arrested, believing that Nina's childhood disappearance was due to Ryu kidnapping her. Nina tries to clear up the confusion but is cut off by her mother. Rei, Nina, and Honey flee to the castle's basement, where Rei opens the door to a portal room. While Honey starts the Portal Drive system, Nina argues with her mother about her autonomy. Nina severs her ties with her mother as she teleports with Rei and Honey to Durandal's hut. The party is subsequently personae non grata in Wyndia and unable to return there for the remainder of the game.

Nina and Cray initially started their journey here to search for Elina, Nina's sister, who went missing after she went on a charity mission throughout the war-ravaged cities.

After the events at Ludia castle which lead to Cray's escape, the party decides to seek refuge in Wyndia to discuss their further plans. They cross the Shrine and Ahm Fen and proceed to the city. After a long trip, they finally make it to the castle and meet the king with who they discuss their further plans. After a tearful reunion with his daughter and mutual supper, he proposes that the party needs to seek counsel with P'ung Ryong, the patron god of the Wyndians. In order to meet him though, a special flute is necessary, the Wind Flute which is stored in the castle underground. The party makes their way down into the basement and procures the flute before travelling to Pung'tap where they finally meet with the dragon.

Wyndia is also part of several sidequests. The thief in the prison inside Wyndia exchanges the treasure ball which is required for unlocking all of Marlok's skills. Moreover, silverware items such as chopsticks, spoon, fork, toothpick or straw can be exchanged for an increasing quantity of aurum in the mansion by talking to the butler. Lastly, a new master, Momo, can be found inside the the windmill at the beginning of the city.

Nina flees from Wyndia after it is invaded by the Insidia Empire. Her departure eventually leads to her meeting the Hero and their teammates, and joining in their search for Ryu. 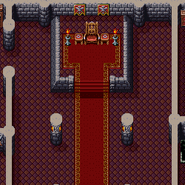 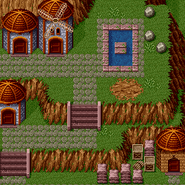 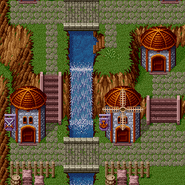 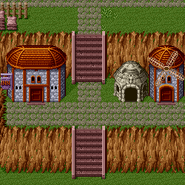 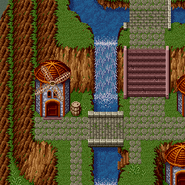 Add a photo to this gallery
Breath of Fire II 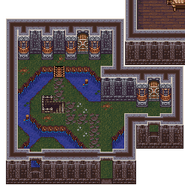 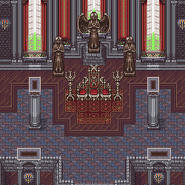 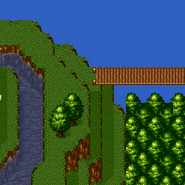 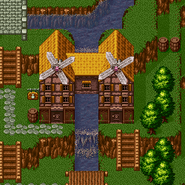 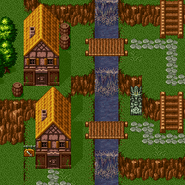 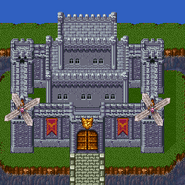 Add a photo to this gallery
Breath of Fire IV

Marketplace, Inn and shops to left. Mansion to right. Master to north. 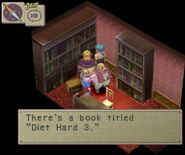 Wind Flute in basement dungeon.
Add a photo to this gallery
Retrieved from "https://bof.fandom.com/wiki/Wyndia?oldid=35927"
Community content is available under CC-BY-SA unless otherwise noted.