The Woren (フーレン, Fuuren?) tribe is a race in the Breath of Fire series. A part human, part feline race that first appeared in Breath of Fire II with the introduction of Katt, they have featured prominently in every subsequent game in the series. They are powerful fighters, and are the fastest race you can have in your party, with the exception of Cray, who tends to be a bit slow, due to the club he carries around. They appear throughout the series, with the exception of the first game; Katt, Tiga, Rei, Cray, and Lin are all Woren. They vary slightly in appearance from game to game, but they are always recognizable as a cat-like race. Only the fourth Breath of Fire addresses actual background information about their clan and shows how they live as a tribe; they seem to be a near extinct or rare race in other entries. 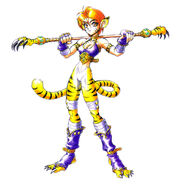