This page refers to the race. For the gameplay system, see Shaman system

Shamans are a mystical group of people with the ability to physically fuse with other beings.

In certain situations, this process results in an original, physically superior being who maintains the host's memories and personality. Each Shaman contains the essence of a particular element, and each, with the exception of Seny, increases a specific stat by 25% when bonded to a host.  The bonus is calculated at the time of fusing, and doesn't change if the host's stats increase. As a result, fusions should be regularly undone and reapplied in order to maintain the best possible stat boosts.

If a Shaman fuses with someone whose bloodline is too strong, such as a member of the Brood or Endless races, the fusion attempt will be unsuccessful and may cause significant collateral damage. As a result, neither Ryu nor Deis may fuse with Shamans.

Shamans also appear to be capable of significant feats of magic within their specialized element, however, they rarely display this. 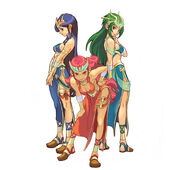 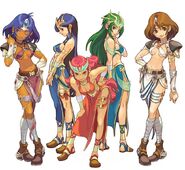 Add a photo to this gallery
Retrieved from "https://bof.fandom.com/wiki/Shaman?oldid=36104"
Community content is available under CC-BY-SA unless otherwise noted.