Sara is an important character in the first Breath of Fire game. She is the older sister of the game's protagonist, Ryu.

At the beginning of the game, Sara and Ryu's hometown, the last known village of Light Dragons, is attacked by the Dark Dragons, setting it on fire. Sara briefly turns all her fellow villagers, including Ryu, into stone, to protect them from the fire. She then sets off to fight Jade, only to get captured afterwards. Ryu then sets out to rescue her.

When Zog is defeated in Scande much later in the game, Ryu and his party fall down through the tower into the dungeons, where Ryu is reunited with his sister. Sara asks that Ryu hand over the Goddess keys so she can destroy them, which turns out to be a trick; Sara is under Jade's mind control, and she hands over the keys to him.

In the two towers north of Agua, where the Goddess Keys need to be for Myria to be resurrected, Jade impedes the party's progress by erecting a powerful barrier. Sara herself destroys this barrier, only to attack Ryu and his party afterwards. Ryu is forced to kill his sister, and this bought Jade enough time to resurrect Myria.

Later, during the final battle against Myria, Sara's voice reaches out to Ryu, asking him to use his power. The power unveils Myria's true monstrous form, allowing the party to defeat her once and for all.

Sara becomes a boss after being brainwashed and ordered to attack Ryu. 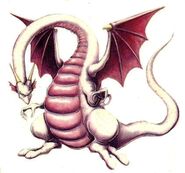 Add a photo to this gallery
Retrieved from "https://bof.fandom.com/wiki/Sara?oldid=28378"
Community content is available under CC-BY-SA unless otherwise noted.