Ryu is a character in Breath of Fire who is both the main protagonist as well as the main playable character in the game. He established the basic template that later Ryus would follow, including their blue hair, general age, proficiency with swords, and Brood lineage. While he was a silent character in the Super Famicom version, he was given sporadic lines of dialogue in the English release.

The character did not possess a name, either in-game or in any official materials related to the original Super Famicom and Super NES releases. In the manual for the SNES game, he is simply referred to as "The Hero," however in game screenshots in the manual he was named "JEFF." He has been referred to as "Ryu" in each of the game's Japanese re-releases as well as subsequent official series material, except in the GBA release where he is referred to as "Zack".

Ryu is the main protagonist and is a descendant of the Light Dragon Clan. He naturally possesses the ability to transform into elemental dragons, though his powers of transformation are sealed during the first part of the game. Further throughout the game he is able to fuse with his fellow party members to become the ultimate dragons: Rudra and Agni. Losing his parents at an early age he lives with his sister, Sara a priestess of the clan. Ryu begins his journey to save his sister who was kidnapped during a brutal assault of his home town Drogen. After setting out out save his sister, Ryu soon discovers that his sisters disappearance plays a part in a larger scheme by the evil Black Dragon emperor Zog. He ultimately sets out to prevent Zog from unleashing the goddess of desire, Tyr, using the 6 Goddess Keys.

Although it isn't overtly depicted, it's heavily implied that after the events of the game, Ryu became romantically involved with Nina. Nina appears in Breath of Fire II to talk to her descendant and reveals that their people lost the ability to transform into birds because she fell in love with and married "man of another clan" which is believed to be Ryu.

Ryu can equip fishing rods, which allow him to trigger a fishing mini-game at a number of ponds situated throughout the world map. There are five different rods available throughout the game and using better rods will result in gaining better items and fish. For example, the pieces of dragon equipment needed to undertake the Dragon Trials can only be obtained through fishing with the game's best rod.

Ryu is a powerful frontline fighter who uses his swords to deal high damage to the enemies. His stats are well rounded and he has good speed, meaning the weight of equipment will have a dramatic effect on when his turn in combat will come. Ryu can also utilize the powerful Boomerang weapons that allow him to to deal damage to whole groups of enemies making him very useful crowd control and help conserve resources like items and AP.

Ryu also has access to the powerful Dragon forms which deal tremendous damage, making him one of the best damage dealers in the party.

By traveling to the various Dragon Clan temples and bringing proof of his worthiness in the form of the dragon equipment, Ryu can undertake trials to earn the power to transform into his clans true form. Ryu can transform into nine different dragon forms, largely elemental forms, but also Kaiser and Agni forms. Dragon forms each cost a set amount of AP to transform, they completely restore Ryu's HP and each do a set amount of damage unless exploiting an elemental weakness or landing a critical blow. Ryu remains in these forms until the player chooses to revert his form, Ryu is killed in combat, or the battle is ended. Agni is unique among the forms because it is considered a fusion and will only work if the whole party is available (i.e. not in a Karn fusion, K.O. or inflicted with a status ailment) and it will take the place of the whole party and give Ryu a huge HP boost. 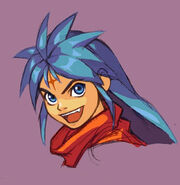 Icon given out by Capcom for their 30th anniversary
Add a photo to this gallery
Retrieved from "https://bof.fandom.com/wiki/Ryu_(Breath_of_Fire)?oldid=36406"
Community content is available under CC-BY-SA unless otherwise noted.