Ryu (リュウ, Ryuu?) is the central protagonist of the Breath of Fire series. Although each game features a different incarnation of the character, they typically share a number of recurring features such as blue hair, an age in their mid teens, and being a proficient fisherman and swordsman. With the exception of Dragon Quarter, Ryu is always portrayed as a member of the Dragon Clan, and is often one of few members to exist in the modern world. Ryu appears in each of the series' installments, and is the protagonist in every game except Breath of Fire 6, where his younger sibling fills the role.

Although, the protagonist's name is usually customizable by the player, he is always referred to as Ryu in all Japanese media. "Ryu" translates to dragon in Japanese, hinting at his Dragon Clan heritage, which is often a mystery in the earlier stages of the games. The name of the series' recurring female protagonist, Nina, can be translated as "fire," meaning that the two names together form "dragon fire," which was prominently featured in the logo of the first two games.

Ryu is usually portrayed as a silent protagonist, although he was giving dialogue in the English translation of the first game, and his child form speaks in Breath of Fire II. In stark contrast to this, the Ryu of Dragon Quarter is a talkative individual, while Nina is portrayed as the game's silent party member.

In the first game (at the center of the image above), Ryu wears a red cloak with a white tunic underneath and white bandages on his arms. He has a brown belt which he carries his sword on and brown boots. He has a red mark on his forehead.

In the second game (center left), Ryu wears a white shirt with red trousers with knee pads and a belt that goes across his chest. He has brown gloves with bandages underneath separated by a gold band.

In the third game (center right), Ryu wears a white long vest with a blue gray and red top underneath, olive green trousers and brown boots. He also wears an orange scarf on his neck. In his younger years, he wears beige jumper shorts under a white shirt with a brown belt, white socks and shoes his scarf is red orange.

In Breath of Fire IV (leftmost), Ryu wears a white t-shirt with tattered sleeves and some gold trim, a green fang shaped necklace, purple trousers and shoes, a pair of gold bracers on his wrist and has hair in a small ponytail. In his in-game appearance his white shirt becomes a tank top.

The last game portrays a different Ryu (rightmost). He looks much thinner and wears goggles on his head. He has a jacket with a beige top underneath, blue trousers and a belt with a star symbol on it.

Ryu is the main protagonist and is a descendant of the Light Dragon Clan. He naturally possesses the ability to transform into elemental dragons, though his powers of transformation are sealed during the first part of the game. Further throughout the game he is able to fuse with his fellow party members to become the ultimate dragons: Rudra and Agni. Losing his parents at an early age he lives with his sister, Sara a priestess of the clan. Ryu begins his journey to save his sister who was kidnapped during a brutal assault of his home town Drogen. After setting out to save his sister, Ryu soon discovers that his sisters disappearance plays a part in a larger scheme by the evil Dark Dragon emperor Zog. He ultimately sets out to prevent Zog from unleashing the goddess of desire, Tyr, using the 6 Goddess Keys.

For the full article on Ryu from the original Breath of Fire, see here.

Ryu lived with his father Ganer Bateson and sister Yua Bateson until he was six years old, when a tragic event separated them. His skill is fighting with a sword and he can equip any heavy armor. His special ability, Dragon Transformation, is one of the most powerful abilities in the game. His field ability is fishing.

For the full article on Ryu from Breath of Fire II, see here.

Ryu is the main protagonist of the story. He is heralded as the Prince of Dragons by those in Dragnier, and by being one of the few remaining Brood left it's up to him to find out why God wanted his people destroyed in the Great War. Like the past Ryu's before him he is a sword user and can wear all heavy armor. He also has a plethora of healing and support magic at his disposal, and combined with his physical feats and the diversity and power his Brood powers grant him he's one of the strongest characters in the game.

For the full article on Ryu from Breath of Fire III, see here.

Ryu was discovered by Nina, lying with no clothing and unconscious in the middle of a crater in the eastern continent. Ryu has lost his memories and has no idea of who he is or where he comes from. He decides to join Nina in her search for her sister, Elina. As their journey progresses, Ryu learns more and more about himself, including the fact he has a "Dragon's Eye", a gift considered to be extremely unusual. Ryu eventually discovers that he is one of the endless, but that he is not whole and in time will need to join with his other half, who is the first emperor, Fou-Lu. As Ryu travels to the imperial capital of Chedo to face Fou-Lu, he calls upon the help of the various dragon gods that inhabit the earth to share their power with him so that he may become strong enough to defeat Fou-Lu, and become the dominant half of the Yorae Dragon. He eventually succeeds and decides that the world does not need gods. He uses his powers to send all the gods back to the worlds from which they came.

For the full article on Ryu from Breath of Fire IV, see here.

Ryu is the main character from Breath of Fire: Dragon Quarter, he has been given the ability to transform into a dragon for a limited period of time. He travels along with Lin, Nina and Bosch. Ryu is not a default name in the English version but it does appear onscreen during the opening cinematic.

For the full article on Ryu from Breath of Fire: Dragon Quarter, see here.

Ryu has the power to transform into dragon forms.

In Breath of Fire, Ryu has to visit various dragon shrines across the overworld and defeat the test proctor alone to obtain their power.

In the original Breath of Fire, Ryu can change into a variety of dragons. Transforming increases Ryu's parameters (which can be seen using the Status option during battle) and he retains the form until the player chooses to make him revert (or he is KOed). AP is only subtracted for transforming. The forms he can obtain are:

The first three dragon forms you obtain are referred to as drakes are: Flame Drake (FlmDr), Snow Drake (SnoDr), and Thunder Drake (ThrDr). These first forms are the weakest and can be obtained after completing the trial in the first dragon tower soon after the Stone Robot event.

The second set of Dragons you get are more advanced versions of the drakes: Bolt Dragon (BltDgn), Fire Dragon (FirDgn), Ice Dragon (IceDgn), and a new addition Gold Dragon (GldDgn). These are obtained after completing the second trial at the Dragon Temple by Nabal castle.

The third dragon you obtain is Rudra. This form is given to you after the third trial at the Dragon Temple on an island northeast of Gust.

The final form is know as Agni. This is obtained in a cave near Romero. It's the strongest form found in Breath of Fire I.

In Breath of Fire II you obtain similar dragon forms to that of Breath of Fire I, but with some differences. Ryu does not retain the dragon form throughout battle when used. In Breath of Fire II, using a dragon form acts like the spells cast by his allies, in which he transforms, uses the appropriate breath attack and reverts. The major drawback is that any dragon form uses all of Ryu's current AP (the closer to max he is, the more damage it inflicts), preventing further transformation or magic use unless recovered (which is difficult to do in Breath of Fire II due to the small selection of AP restoration items in the game).

The first set is obtained after the well event in Capitan these Whelp forms are know as puppies and are small hatchling dragons. These include: Fire Puppy, Ice Puppy, and Thunder Puppy.

The second set you obtain is in the waterfall by the Wildcat Cafe. These are larger stronger forms and look like typical Western depictions of dragons. They are: FireDrgn, IceDrgn, and T.Drgn.

The last Dragon form you obtain is during the Grand Church event while fighting Ray. After being hit by Ray's breath attack a few times, Ryu discovers the transformation on his own. G.Drgn is the strongest dragon form in Breath of Fire II and inflicts 999 damage at full AP.

Ryu transforms into various of Dragon forms by means of using the orbs called "Genes" which can be found throughout the world or provided in certain events and display any three combinations will effect the forms and attributes of each dragon forms. Ryu is charged an AP cost for each round the player chooses to keep him in dragon form. The more Genes used and the more powerful the form, the higher the cost to transform initially and the higher the form retention cost is per round.

Dragon forms are not exclusive to Ryu. The main antagonist, the Emperor Fou-Lu, has access to dragon transformations also. Carrying over from Breath of Fire III, both characters are appropriately charged per round while transformed. The cost is one-fourth of what it costs to transform.

while only four are accessible by Fou-Lu:

Dragon Summoning is only available to Ryu, seven abilities of which can be acquired:

This Ryu has only one form in an appearance quite similar to the Breath of Fire IV form as a human with dragon-like features. He possess the "D-Counter", which keeps count of the usage of his power (in percent form), causing the dragon to erupt within him should he reach 100% before a certain event in the game; this results in a game over. 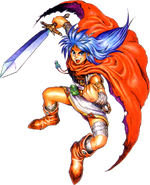 Ryu from Breath of Fire

Ryu again from Breath of Fire

Ryu from Breath of Fire II

Ryu from Breath of Fire III

Ryu from Breath of Fire IV

Ryu from Breath of Fire: Dragon Quarter
Add a photo to this gallery
Retrieved from "https://bof.fandom.com/wiki/Ryu?oldid=36016"
Community content is available under CC-BY-SA unless otherwise noted.