Nina is a playable character in the original Breath of Fire game. She is a member of the Wing Clan, and the princess and heir apparent of Wyndia. Near the end of the game, Nina acquires her Clan's innate ability to become the Great Bird, allowing her to transport the party to any place with a suitable landing spot.

Nina is first seen when Ryu visits Wyndia, concerned for her father, who refused to ally with the Dark Dragons' leader Zog and the Wizard of Karma and was poisoned by one of them as a result.

While Ryu sleeps the night, the player shifts control to Nina, who sets off to face the wizard of Karma in the hopes of retrieving the Remedy and saving her father's life. She is joined by two Wyndian soldiers (named Sr-1 and Sr-2), who reach the Wizard's experiment chamber but are weakened by his Xeon Gas, a special toxin engineered specifically to affect the Wing Clan.

One of the soldiers escapes and lives just long enough to deliver a message to Wyndia that the Princess has been captured by the Wizard of Karma. Ryu is quickly recruited to save her - not being of the Wing Clan, he is relatively unaffected by Xeon Gas - and is escorted to the tower by an older, veteran Wing Clan soldier, who waits on the roof as the escape route; he cannot proceed into the gas-filled experiment chamber and would be useless if he tried.

Defeating the Wizard, Ryu and the veteran soldier return to Wyndia with Nina and the Remedy, being granted an aerial salute by other Wing Clan soldiers. Healing the king, Ryu is permitted to use the tunnel under the castle to exit Wyndia to its east, with Nina insisting on accompanying him on his journey to stop Zog.

Much later in the game, when Nina attempts to insert the Time Key into a machine in Tock to save the people of Carmen, she is drawn into a time portal created by the key and sent an unknown number of years into the past in the musical kingdom of Tunlan. Suffering from amnesia, she is cared for by a couple until the party find her in a highly repressed state in the present. With the help of a mysterious cloaked man (in actuality Jade, Zog's treacherous and manipulative lieutenant), they restore her mental health and recruit her back into the party.

Now an adult, Nina changes from a red leotard to blue, and gains the ability to become the Great Bird, inherent to all adult members of the Wing Clan.

Nina seems to bicker a bit with Deis (Bleu in original translation), which may be due to their similar roles as 'pretty girl' spellcasters. Deis at this time was still shaking off a long hibernation and prone to casting half-remembered spells with disastrous consequences, and may have been feeling jealous.

At the end of the game, Nina is the last member of the party to leave Ryu, waving him goodbye as he leaves the castle.

As with every game in the series, Breath of Fire II features another Nina (hereafter called Nina II for distinction), generally similar in appearance to the original (Nina I) due to her blonde hair and the presence of wings.

Nina II attempts a ritual to obtain the power of the Great Bird that will allow her to fly at the cost of her human form. Venturing in the dungeon she finds the power's Guardian, who is none other than Nina I, the long ancestor to Nina II. Nina I reveals she fell in love with a man from another race which caused the bloodline to dilute, thus depriving its people of the ability to transform into birds naturally (strongly hinting the man in question to be Ryu himself). Nina I then dons an elaborate suit of pink armor and battles her as the final stage of Nina II's trial. When wearing her armor, Nina I's wings become much larger and nearly black, much like Nina II's.

Nina I congratulates Nina II's success on her trial and bestows upon her the MarkWing with which to perform the ritual to become a Great Bird. Nina I disappears but asks Nina II if she forgives her for falling in love with a person of another race. If Nina II replies negatively, Nina I will ask to not be so harsh on her hinting that Nina II has fallen for a non-Wyndian as well (Ryu II in this case). If Nina does forgive her, Nina I departs grateful.

Wielding a rapier and wearing light armor, Nina's best stats are AP, Intelligence, and Agility, but she suffers from a very weak melee attack that quickly becomes near-useless, in addition to a fairy lousy defense.

Her EXP thresholds for leveling up are strange, as she only requires 260,000 EXP in total to reach level 46, but the total required EXP is drastically higher for level 47 than 46, requiring her to obtain a total of 773,000 EXP, and then she suddenly levels up at a similar rate to other characters for the remaining levels.

Her sole strength is in her magic, which is orientated almost entirely towards healing and stat buffing, and later including holy attacks. If Nina performs any of her spells, she will always move first in combat (except for Bo if he also casts Cura), making her a vital mainstay in any party configuration.

When she doesn't need to use a spell, Nina tends to do more damage utilizing an attack item such as the E.Key or using a weapon as an item, neither of which is consumed on use. Other characters could do this too, but the same item can only be used once per turn, and every other character has a better normal attack than Nina.

The best armor Nina can wear usually has additional effects to make up for her low defense, such as damage reflection or HP regeneration while walking. She is one of only two female characters (the other being Deis), and thus female-only equipment is often resigned for her.

Breath of Fire II, Nina I unarmored, out of battle

Breath of Fire II, Nina I armored, out of battle

Breath of Fire II, Nina I armored, in battle 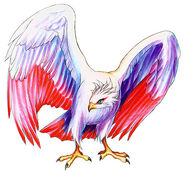 Add a photo to this gallery
Retrieved from "https://bof.fandom.com/wiki/Nina_(Breath_of_Fire)?oldid=37104"
Community content is available under CC-BY-SA unless otherwise noted.