Nina is a character in the Breath of Fire series. She is the lead female/heroine in every game except Breath of Fire II in which she shares the role with Katt, and serves as a love interest of Ryu; though the relationship between them is usually left ambiguous with strong implications. Nina's name translates to fire/young girl/favor/grace/great granddaughter. All meanings of her name fits her character well in each story. However, the meaning of fire fits perfectly into Ryu's dragon lineage, along with the themes of each story. Because of this, Ryu and Nina's names placed together translates into dragon fire.

Like Ryu, many of her incarnations share similar traits, namely blond hair and wings. Of her appearances, Nina's first three incarnations are the most identical; all are members of the angelic Fae tribe, as well as princesses. As previously mentioned, there is an implied romance between her and Ryu in each rendition of the franchise although it is not always explicitly shown. In Breath of Fire: Dragon Quarter, Nina is neither a princess nor even naturally winged.

In some games, Nina has been classed as a member of the Wing Clan or Fae, a winged tribe. The Wing Clan were winged warriors who lived around Wyndia, the older members of which could transform into large birds. However, it has been theorized that their wings degenerated as time went on, until a point came when they didn't have wings at all. This is expanded upon in the second game where Nina, while seeking the power of flight, interacts with her predecessor who admits to being responsible for the slow declination of her people after falling in love with a man from another tribe.

Nina is always portrayed as a young girl with blond hair and the wings typical to the Wing Clan, except in Breath of Fire: Dragon Quarter where she has no wings at all but Air Purifiers on her back. She is almost always wearing some type of dress or robe in each game.

In the original Breath of Fire, Nina is introduced in her hometown of Wyndia (or Winlan in the U.S. Version). The king of Wyndia, her father, was poisoned due to his decision not to ally with the Dark Dragon clan by the Wizard of Karma. Nina sets off alone to force the wizard to give her the remedy for the poison and along the way is joined by nameless Wyndian guards. In the Japanese GBA version, the two guards are named after Jiiku and Rai, two characters from the doujinshi "Princess of the Wings", which takes place after the events of the game. They successfully make it to the tower of Karma but are quickly immobilized by Xeon Gas, which is deadly to the Wing clan. One of the guards escapes the tower mortally wounded and flies back to Wyndia to help rescue Princess Nina. Ryu is unaffected by the Xeon gas and saves Nina. The pair return back with the Remedy and cure the king's poison. Nina then joins Ryu in his journey.

Later on in the game when the party must save the people of Carmen, Nina attempts to put the time key in at Tock, causing a portal in time to open and swallow her. She is sent years in the past to Tunlan, where she develops Amnesia and is cared for by a couple there. By the time Ryu and party can find her, she has aged a few years. With Jade's help (unknown to them), they cure her condition and she rejoins the party with the ability to become the Great Bird. At the game's conclusion, she is the last companion to leave Ryu's party.

For the full article on Nina from Breath of Fire I, see here.

Unlike our heroine in the first game, this Nina has a pair of black wings and has been exiled from her home country of Wyndia. According to legend a child born with black wings to the royal family will cause misfortune to Wyndia. In order to protect the country, the child must be killed, as mandated by law. Thus when Nina grew wings, they were black like in the legend. Unable to kill their beloved daughter, the King and Queen told the country she was dead and sent her off to the Magic Academy in HomeTown, forbidding her to come back in order to protect her from people who knew of the legend. Because of her painful past, Nina is shy, distant, and sometimes without confidence. Despite this, her shyness and distance seems to degenerate as the story unfolds. Throughout the game, Nina begins to become more forthcoming with her personal feelings when speaking to Ryu.

Nina first joins the party when Ryu and Katt come to her aid in rescuing her little sister, Mina, who has been kidnapped by the infamous Joker gang. Joker promises to release Mina if Nina becomes his slave and demand that she bow to him. In the Japanese version, he tells her to lick his boots. Nina manages to bury Joker under an avalanche of rocks while Ryu and Katt secure Mina. However, Joker turns into a demon and the trio fight and defeat him. Ryu and Katt accompany Nina and Mina to Wyndia castle, where Queen Hina denies knowing Nina and casts the party out of the castle. However, Nina remains grateful to Ryu and decides to stick with his party.

Later in the game, when the party has to journey to the capital of Evrai which can only be reached by air, Nina volunteers to use the power of the Great Bird. However, she withholds the information to the party about the consequences of using such a power. Returning to Wyndia Castle, Queen Hina reunites with Nina and explains that she forbade her to come back simply to protect her. She explains they have missed her and now the king lay on his deathbed, wishing to see her again. The King and Queen understand Nina's wish to use the Mark of the Wing, and subsequently she is allowed access to the basement to do so.

Nina must undergo a trial to obtain the mark. At the climax of the trial, she is confronted by the Guardian who ends up being Nina 1, whom also reveals that she is her ancestor. Nina 1 reveals that it is her fault the Wing clan lost their inherent power of turning into a Great Bird when she married a man from another tribe. After obtaining the mark, Nina leaves in the middle of the night to transform into the Great Bird, which is irreversible. Much to Nina's dismay, Mina steals the Mark and runs up into the ceremonial tower and locks the door. She tells Nina she didn't know she had been exiled nor that her wings were a bad omen and that since she is weak, this is the only thing she can do. Despite Nina's pleas for her sister to abandon this decision, Mina carries on so that her older sister will not have to suffer the consequences of becoming the Great Bird. Mina then becomes the Great Bird in Nina's place. From this point on, Nina vows to fight not only for the sake of the world, but to honor her sister's sacrifice as well. The Great Bird allows flight on the world map, but is only accessible up until the scene with the dragon at Gate.

For the full article on Nina from Breath of Fire II, see here.

New to the series is the introduction of the third Nina whom we meet as a child. She continues the tradition of Nina II by being an offensive magic caster. However, she does not have wings in the beginning of the game. Feeling pity for the young child Ryu after being abused in an effort to make him turn into a dragon by Balio and Sunder in front of the King and Queen of Wyndia, Nina decides to release him from the castle jail. Nina is very young and naive, so Balio and Sunder trick her into unlocking their cells where they then capture her to use her for ransom. Ryu quickly saves Nina, hiding from Balio and Sunder until they escape into the city through the castle graveyard. Throughout the first quarter of the game they are chased by the two stallion brothers, meeting Momo along the way. They eventually are caught again by Balio and Sunder and forced to fight in the tournament to reclaim their freedom using Momo and leverage. Ryu meets and duels Garr, where he loses, but is given his freedom per the winner's request. Ryu, Nina, Momo and Garr fight and defeat Balio and Sunder later on the bridge.

For the full article on Nina from Breath of Fire III, see here.

Appearing once again as the princess of Wyndia, but a la Breath of Fire II she is not the only one this time. In Breath of Fire IV Nina meets Ryu while searching for her missing sister and fellow princess of Wyndia. Similar to the Nina in Breath of Fire III, she is a bit naive. This is most likely because of her being a young and sheltered princess. She was travelling with her fellow childhood friend Cray, when they suddenly came into contact with a large sand dragon. The dragon seemingly attacks and damages their sand ship, leaving the two stranded. Nina wanders off momentarily, discovers a wreckage, and happens upon another dragon. After this dragon leaves, Nina discovers an unconscious (and naked) Ryu within the wreckage. After learning of Ryu's purpose to embark on a journey, she decides to accompany him.

For the full article on Nina from Breath of Fire IV, see here.

In Breath of Fire: Dragon Quarter Nina is a victim of a experiment that surgically grafted Air Filters into her back. To keep the experiment secret, she also had her vocal chords removed which made her the mute character instead of Ryu. Due to being a prototype model, Nina's body can't handle the air purification process and she is slowly dying. The injustice against her is what spurrs Ryu into defying the corrupt government and traveling to the mythical surface in the hopes he can save Nina's life.

For the full article on Nina from Breath of Fire V, see here.

Nina has great magical abilities throughout the series. She usually has the highest AP and Magic Attack, but her physical attack and defense are slightly lower than average. In Breath of Fire I and Breath of Fire IV, she was the group healer, while in II, III, and DQ (V) she played the role of the magic-attacker, competing with Deis. 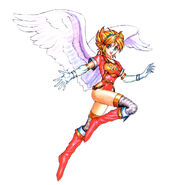 Nina from Breath of Fire

Nina again from Breath of Fire

Nina from Breath of Fire II

Nina from Breath of Fire III 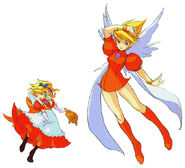 Nina from Breath of Fire IV

Nina from Breath of Fire V 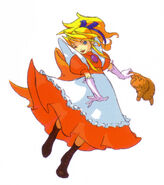 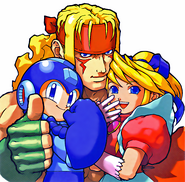 Nina (child) from Breath of Fire III With Mega Man aka: Rockman (left) and Alex from Street Fighter III (middle) 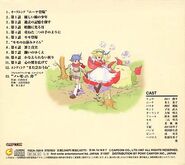 Retrieved from "https://bof.fandom.com/wiki/Nina?oldid=39675"
Community content is available under CC-BY-SA unless otherwise noted.