Myria, also known as Tyr or Maria in some English translations, alternatively referred to as the Goddess of Desire and the Goddess of Destruction, is a female entity who offers the promise of granted wishes. Her actual goal is chaos; for thousands of years, she has incited wars. She has a beautiful and angelic appearance, but when threatened, she transforms into a hideous demon surrounded by snakes. She is the main antagonist of the first three Breath of Fire games that are part of the same timeline.

Myria is the cause of the original split between the Light and Dark Dragon clans, both of which feuded over her power. A legendary hero managed to imprison Myria within a tower and seal her away with six keys. In the original Breath of Fire, the Dark Dragons conspire to reassemble the keys and release her. Even though the leader of the Dark Dragons, Zog, was eventually defeated, his usurper, Jade, successfully resurrects her.

Myria stationed herself on the flying fortress Obelisk, flying high above what used to be Scande (the capital of the Dark Dragon Empire). Ryu and his companions storm the fortress, defeat Jade, and encounter Myria. Before the party fights her, she asks if they have a wish. The game slightly alternates into two endings afterwards:

If Ryu managed to learn all of his Dragon spells (including Agni), Sara will communicate with him telepathically and insist on using the said power. Agni's attack reveals Myria's true snake-like form, and the party defeats her once and for all. With her defeat, the world begins to rebuild.

If Ryu didn't obtain the Agni spell, then the party fights Myria in her human form. They defeat her, however, as soon as they leave, Myria appears to still be alive...

Myria does not appear in Breath of Fire II. However, Deathevan, the main antagonist of the game, is her spawn.

Myria acts as an overzealous mother of all the world's creatures, "protecting" them from the potential dangers of technology and the Brood (the nigh-extinct dragon clan). She is also portrayed as the younger sister of the sorceress Deis. Centuries before the beginning of the story, Myria launched a crusade, later known as the Brood War, against the Brood and appointed the Guardians as her champions in this cause. Despite the pacifism of the Brood, Myria and the Guardians mercilessly slaughtered the dragons to near-extinction.

The goddess also turned her wrath on anyone who refused to support her cause, including her elder sister Deis and Yggdrasil, the Trees of Wisdom. Myria had Deis imprisoned beneath Angel Tower and rewrote history to portray her as an evil witch who aided the wicked dragons. She also isolated the Yggdrasil trees into secluded groves throughout the world so that their collective wisdom would eventually disappear. Myria's revision of history and the faith of her followers was so complete that no one would question her actions for generations to come.

By the time the story begins, the Brood are all but extinct, known only in legends as demons who tried to destroy the world. Myria would later face her downfall at the hands of the only remaining member of the Brood, Ryu. In her final moments, Myria was in despair and believed that the world would soon end without her guidance. Deis then appeared before her, revealing Myria to be her younger sister, tells her that mortals were better prepared to take care of themselves than she believed and that the entire world with all its life will survive one way or another. With this, both Myria and Deis vanished into the unknown.

Myria in Breath of Fire with red glowing eyes. 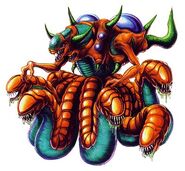 Add a photo to this gallery
Breath of Fire III

Ultimate Marvel vs Capcom 3 Myria Card
Add a photo to this gallery
Retrieved from "https://bof.fandom.com/wiki/Myria?oldid=36738"
Community content is available under CC-BY-SA unless otherwise noted.