Lin is a character within Breath of Fire: Dragon Quarter.

Lin is a 21 year-old agent of Trinity, a group that is opposed to the current government. Because of this, her D-Ratio number has been erased. She meets Ryu shortly after he rescues Nina and joins him in protecting her as they climb to the surface.

Taking advantage of her skills with guns, Lin can Lock-on to a target and initiate a battle from a distance. Against multiple and/or tough foes, it is normally advantageous to keep an enemy at a safe distance to minimize damage taken. However, if an enemy catches her by surprise and manage to close in, she will have a hard time in responding and getting the first hit. She can also destroy boxes from a distance. Combine that with Nina's Item Vaccuum, your party can gather items from distance without running into an enemy.

Lin's second ability, Charge Shot, knocks back (but doesn't injure/kill) foes that are hit by the blast. This can be useful to avoid fights or mess with enemy formations before battle. She is a sitting duck while charging, so it's best to give Lin plenty of room before using this ability.

Lin is the slowest character in the party, but this is somewhat made up by her considerable attack range with firearms. Her skills can cause status effects or manipulate enemy position. She can push away enemies at a safer distance or into Nina's glyphs.

Her personal action in battle is Profile, which is used to view data on the enemy. Useful information includes HP, elemental strengths/weaknesses, item drops, and items that can be stolen. Lin has to be within movement radius of the enemy to use it, but it costs no AP. 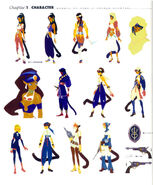 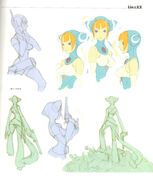 Ultimate Marvel vs Capcom 3 Lin Card
Add a photo to this gallery
Retrieved from "https://bof.fandom.com/wiki/Lin?oldid=39276"
Community content is available under CC-BY-SA unless otherwise noted.