Katt (リンプー , Rinpuu) is one of the two lead female/heroines in Breath of Fire II. She is a sassy young competitor from Coursair. Ryu meets her at the coliseum, where she is introduced as a naturally born fighter, who wields a claw-tipped staff in battle. Katt is the first Woren to appear in the series; all following games in the series include a Woren characters. She also serves as a possible love interest of Ryu.

She loves to fight, and everything is win or lose, for her. She is interested in everything but bores easily, because of her agile nature. She loves competition.

Katt has short straight red hair, green eyes, and cat-like ears. She only wears a lightly armored sports sleevless top that end shortly before her belly button. Her lower body is that of a tiger's and is naturally covered with fur. She wears open-finger gloves and open-toe shoes, and wields a staff with clawed cat paws on both ends.

Katt is guileless and often speaks whatever is on her mind. She's somewhat arrogant, often bragging in front her opponents in the coliseum before battle. She accepts Ryu as a friend, during the story after he saves her from the poison darts, and joins his party in order to find out who launched the needles and seek the reason behind it. It is implied throughout the game that she may have romantic feelings for Ryu, but more depth to this is inconspicuous.

Katt has the highest attack speed in the party, but suffers from low defense and average HP. Katt is not magically inclined like the rest of the cast. She can learn a few powerful offensive spells early in the game, but will only be able to use them once her AP grows large. This means that she won't be able to use these spells until much later in the game because her AP growth is extremely poor (merging her with the Devil Shaman does incidentally boost her AP enough to use these high cost power spells earlier, so less time can be spent on leveling her up). Her field abilities are Hunt and Smash, and her fighting ability is Dare (where she provokes the enemy party, concentrating all aggression on her). She changes her abilities and appearance when merged with the Devil Shaman. When combined with the Devil Shaman, Katt can no longer hunt, but her combat abilities skyrocket immensely.

Katt also appears as a minor boss early on in the game, in the fight in Coliseum. 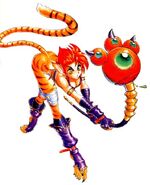 Katt fused with the Shamans
Community content is available under CC-BY-SA unless otherwise noted.