J.Worm is a boss found in Breath of Fire II, in the basement of SimaFort.

Defeating the J.Worm rewards the party with the WormMeat, one of the three key ingredients Jean needs for the cooking competition in SimaFort. The party must also defeat G.Roach and GoldFly.

Ryu should use a Dragon transformation, and then constantly attack. Sten should use Spark (or Flame if he knows it) and Nina should use S.Boom. Rand should attack and heal when needed.  It's a good idea to have Nina and Sten in the rear of the defense formation, because they have low HP and Defense and their spell damage doesn't take a penalty.

J.Worm frequently uses SwtBrth, which can put party members to sleep. They can be woken with Rand's Wake skill or Nina's regular attack, but unless most party members are sleeping the party should focus on dealing damage. 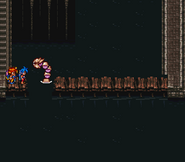 Add a photo to this gallery
Retrieved from "https://bof.fandom.com/wiki/J.Worm?oldid=30279"
Community content is available under CC-BY-SA unless otherwise noted.