The Highlanders (高山族の, takayama-zoku?, lit. "Alpine Tribe") are a clan of anthropomorphic chimpanzees who reside in the mountainous kingdom of Highfort. The people of this clan are incredibly gifted in terms of athletic ability, like quickness and jumping.Their clan are a military nation. They first appeared in Breath of Fire II.

Their land shows scars of the wars they've fought; Highland itself is located in a scorched wasteland, and their central fortress hums with machinery dating back to the war, including a device that could purportedly allow their primary base of operations to fly. By the time of Breath of Fire II, the Highlanders were gradually starting to tone down, having squandered considerable resources and personnel for the sake of Shupkay's megalomaniacal bid to re-activate the Highland Floating Fortress and conquer the world.

Relative peace and prosperity in the ages to follow would mean that Highland gradually fell into decline, with little need for a large military presence and certainly little need for an occupying military force. By the time of Breath of Fire III, the Highlander Clan are still around, but the culture they once represented is nowhere to be found, though a number of Highlanders can be found in civilian and military roles. They seem to be especially common acting as criminal enforcers. 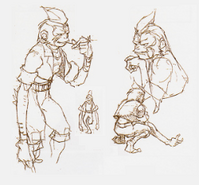 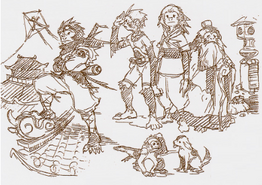 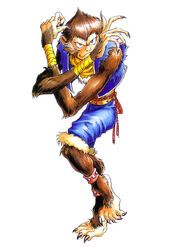 Character art for Sten Legacy, a Highlander in Breath of Fire II

Breath of Fire III Highlander sprite
Add a photo to this gallery
Retrieved from "https://bof.fandom.com/wiki/Highlander?oldid=36057"
Community content is available under CC-BY-SA unless otherwise noted.