"Ryu...Let me tell you one thing... Don't hold back. If you don't fight with all you've got, I'll kill you."
— Garr to Ryu during the Contest of Champions

"Garr is a member of the guardian race, and has been the victor in the Contest of Champions years running. When he meets Ryu, he seems intrigued by his dragon abilities and seems to know more about the ancient Brood than he lets on at first. Garr's attack power is like no other, and he has HP to burn, making him the heavy artillery of your party. He acquires a wide set of fire spells, but doesn't have the intelligence level to put them to good use. Besides that, though, his only downfall is his low agility."
— Bio

Garr is a main character within Breath of Fire III. He is a Guardian, a race created by the goddess Myria. It is recorded at Angel Tower that Garr killed 299 Brood during the war, the most of any of the Guardians enshrined there.

The long-standing Champion of the Contest of Champions, Garr is one of the Four Guardians created by Myria, the Goddess of Destruction, to eliminate the Brood from the face of the Earth. He, along with his brethren Guardians Gatz, Gaw and Gaist, slaughtered the Brood, who put up no real resistance.

As one of Myria's Guardians, Garr was active during the Great War, where he slaughtered a number of dragons under the belief they were evil. At one point he and fellow Guardian Gaist were confronted by Deis, scolding them for what they did and telling them if they never thought their God was wrong. Before she could take them to Myria, however, Deis was entombed on Angel Tower for being considered an ally of evil. Garr fought because he thought it was his purpose, but the seed of doubt was already installed after that.

After the end of the war, most Guardians choose to enter the Stone Sleep, returning their powers to God and entering a deep sleep. With budding doubts about his purpose and the Great War, Garr decided to forgo the Stone Sleep and leave Urkan Tapa to travel the world, with only his instinct telling him there was still atleast one dragon left on the world. During his voyage he became a champion at the Contest of Champions and a regular at The Organization.

First half of the game[edit | edit source]

Ryu and Nina first meet Garr unknowingly, while captured in Fahl's store. Garr, however, made no attempt at stopping them from escaping. Later on, the whole party would be forced to enter the Contest of Champions. Garr participated as well, single-handledly defeating teams of three until he reached the final against Ryu. Despite putting a good fight, Garr ultimately soundly defeats Ryu. When asking for his prize to Balio and Sunder, Garr demands Ryu and his friends much to Balio's relunctance.

After Ryu wakes up from the battle, Garr tells him he held back during battle and that he'll take care of him. After releasing the last party member from Balio and Sunder's cage, Garr tells Ryu he's a member of the ancient Brood, and tells him to travel to Angel Tower if he wants to learn about the Brood and his dragon powers.

Balio and Sunder, unwilling to let the kids go after all the troubles they caused to them, ambush them on the Maekyss Gorge with a horde of Bullies. After the party deals with the enemies in front of them, they discover to their surprise that Garr has easily taken care of the entire horde on the other end of the bridge, and quickly joins them against Balio and Sunder. Despite the horse brothers merging into the mighty Stallion, the party is able to defeat him in battle. Garr then decides to join Ryu's party in order to accompany him to Angel Tower himself.

The party's first stop is Wyndia in order to get the passport needed to cross the Checkpoint into the Eastern lands. After that, and having Nina rejoin them on their way after she heard Ryu might die after learning of his heritage, the party cross over the Checkpoint and arrive at Rhapala. Garr plays a minor role in training Beyd, fixing the Lighthouse and helping the Faeries, always lamenting that the Porter's Guild boat didn't arrive and how their travel has been delayed. After all that, the party is granted use of the Guild's shortcut east through Mt. Zublo, where they are faced by a mysterious old man and the two fire serpents he summoned.

Finally arriving at the Urkan Region, Garr first visits his home town of Urkan Tapa and meets with its elder, Sudama, to gain access to Angel Tower. Once they reached the entrance to the tower's underground, Garr asks the others to leave him and Ryu proceed alone. He presents Ryu to the tomb of the Brood and reveals that by killing him, the last Brood, his purpose will be finally complete. A battle ensues between them but Garr finds himself soundly defeated by Ryu's full power. Just as he suspected, Garr confirms the Guardians were no match to the Brood if they actually fought back, and then witness Ryu turn into a berserk Kaiser Dragon and leave Angel Tower.

Second half of the game[edit | edit source]

Garr spent the following years trying to find Ryu, and eventually he heard rumors of a dragon attacking Dauna Mines. Traveling there, he offered his services in taking care of the dragon and was granted access to the underground mine. Deep beneath it he found Ryu as a litle Whelp dragon and swiftly knocked him out, reverting him to human form. Once Ryu woke up, Garr tells him how he always believed it was his purpose to end the Brood, but now he has confirmed that they held the power to easily defeat the Guardians in battle, yet decided to not fight back at all. Having doubts over why they let themselves die and why the Brood needed to be killed, Garr tells Ryu he has all the right to kill him, but asks him to let him live until they can find the truth. Ryu agrees to this and the two attempt to leave the mine.

Right before leaving the mine, the two are faced by the Dragon Zombie, a form made of the Brood's frustration and desire for vengeance. The Dragon Zombie goads Ryu into killing Garr, their hated enemy, but Ryu refuses and a battle ensues. After the battle, the two finally leave the mines and move towards Wyndia, having a small chance encounter with the mysterious monster of Ogre Road, which Ryu later discovers to be Rei.

Once on McNeil Village, they reunite with Nina and explain the situation about Rei to her. The party deals with Rei's revenge against the Organization and Mikba, and later join Momo and Peco in solving out the mystery of Palet's disappearance. With Rei and Nina barely securing a new passport to cross the Checkpoint, Garr leads Ryu back to Angel Tower. Garr's plan is to enter the Stone Sleep, as their God appears to them to reclaim its power during the ritual, with Garr hoping to ask God about the truth before turning to stone. The ritual fails, however, with Deis appearing instead to tell him God will not come and they need to free her from her prison. Garr locates his former comrade Gaist, a Guardian who lost faith in their mission and exiled himself into Cliff. They learn Ryu must kill Gaist in order to free Deis, and he does so in a battle. Once back on Angel Tower, they meet with Deis in a naked human form. Garr is comically beaten up by her before she instructs them to meet her at her shrine at Mount Zublo. There Ryu and Garr learn how to find God.

After a long adventure, the party eventually arrives at Dragnier, the town of the Brood. Garr finds that all the remaining members of the Brood, who gave up all their powers, were forgiving of his actions. He, however, feels that even if he has lost his faith and cast doubt on his actions during the war, that it was not enough to earn the trust of the villagers, feeling his guilt almost overwhelming. He, Ryu and Nina confront the elder of the clan, Jono, for information, learning the history between the Brood and Myria, where Garr unwittingly insults him, forcing Nina to take over the conversation. Ryu, and his friends, end up fighting Jono's dragon form as a test in order to obtain the Infinity Gene, but the passing of power kills him in the process. This helps prepare Ryu for the final fight with Myria.

When the party finally meets Myria inside her orbital station, Garr joins the others in opposing her decision to keep Ryu trapped in the station for the sake of the world, and he confides to Ryu that, while it may have been a selfish reason what drove him to bring Ryu to this point (to know the truth of his actions), after all the time traveling together he now trusts him much more than Myria. Garr fights together with the party against Myria in the final battle, and after her defeat Garr's body starts to glow. As a Guardian's power is borrowed from the Goddess, so his life must end with hers, and so Garr turns into a stone statue just as the station is crumbling apart, leaving the party to escape without him. Garr's final words to the party being that they'll have to walk on their own from now on.

Garr's use in battle is extremely straightforward. His only marketable traits are an incredibly high attack power and a good amount of HP and defense (the latter abilities making him a "tank"). His other abilities are below average at best. His magical skills are negligible; his spells are moderately useful, but an abysmally low amount of AP makes it nearly impossible to use his spells to any real effect. Couple this with a very low speed makes Garr a character with a highly specialized purpose. He can be difficult to use, but with appropriate training under certain masters, he can either be a lumbering titan or a trotting behemoth. He is also handy when he learns the skill 'Gambit', because at that point in the game, if it hits, decent damage in the 200-300 region should be dealt. Garr has a natural resistance to fire, taking only half damage from any and all related fire-based attacks and spells. Inoculating him or giving him fire-resistant armor will render him entirely immune to fire.

Garr is faced as a boss twice during the course of the game. The first battle, in the final stage of the Contest of Champions, is not winnable. He is later faced again as he turns against Ryu in Angel Tower. 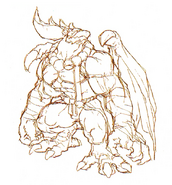 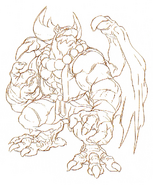 Garr's defeat at Angel Tower
Add a photo to this gallery
Retrieved from "https://bof.fandom.com/wiki/Garr?oldid=36346"
Community content is available under CC-BY-SA unless otherwise noted.