Fusion is an important gameplay element in the Breath of Fire series. Fusion involves the combination of two or more things (people, genes, etc.) that results in the unleashing of locked powers or the combination of powers. When successful, fusion can cause drastic alteration of appearance.

In Breath of Fire, Karn has the ability to fuse with Bo, Gobi and Ox to create more powerful forms. Along with this, Ryu's ultimate dragon form Agni seems to be a form of fusion spell, as it results in all eight party members merging into one dragon.

Karn merged with Gobi and Bo, this form retains Bo's ability to walk through Forests and a faster bow for Hunting on the world map. The form has great HP, Speed and Attack Power but low defense.

Karn fused with Gobi and Ox, this form can only be used underwater and has no special abilities. The form is very fast and strong, and has some decent defense but its restriction of needing to be underwater makes this form not as useful.

Karn fused with Bo and Ox, this form retains Ox's ability to break rocks and gains enhanced strength allowing him to push even heavier objects in towns and dungeons. This form is has great strength and HP growth and is not too shabby on speed either.

Karn fused with Bo, Ox, and Gobi, this form takes on a bizarre duck-billed dragon that is a bit "cute" compared to Karn's other forms. This form possesses the unique ability to Roar and open the special sealed Dragon Doors found all across the world map. This form sports the highest speed, strength, and HP of the all of Karn's forms. It is also unique in that is has more than one regular attack; its Roar attack is its standard attack, but sometimes, it will instead roll into a ball and slam into an enemy, generally doing far more damage.

Known as Infinity in the Japanese version, this is Ryu's ultimate dragon form and is a fusion between him and the rest of the party. This is shown in its unique body which takes on attributes of all of the party members. The form gains max HP (999), and its special Breath attack does max damage. Its stats are all around extremely good. The form cannot be activated if any party members are suffering from a status infliction, unconscious, or being used in one of Karn's Fusions. 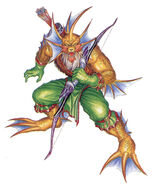 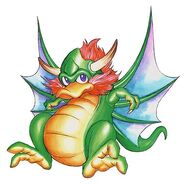 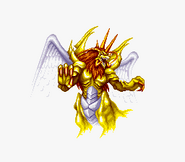 The image that appears when Ryu transforms into Agni in the SNES version.

In Breath of Fire II the Shamans have the ability to fuse with Ryu's party members. In addition to this, the Fire Shaman's attempt to fuse with Ryu allow him to access his dragon abilities. The Shamans can be found across the world and each of them grants statistical bonuses to the party member, some combinations though, will result in the party member being transformed into a special fusion form that grants huge stat bonuses and special abilities. Ryu and Bleu are both ineligible to use the system for story reasons. Fusions will be reverted if the party member is dropped to critical health, knocked out, or afflicted by the Zombie status condition, requiring the fusion to be performed again.

When Bow is fused with Seny (Holy) and Shin (Dark) he transforms into an armored robotic knight with an arm cannon. His fusion form focuses on making him a better healer for the party with better speed, magic defense, and more AP to cast magic. His Wisdom and AP go up by 40%, his Vigor goes up 35%, and his ATK and DEF go up by 25%. His new Command is Spry (Spray) and allows him to hit all enemies in battle with his attack but the attack cannot get critical hits.

When Katt fuses with Shin (Dark) she transforms into a dark skinned cat with elven ears and body length blonde hair. This form largely focuses on increasing Katt's Vigor and AP allowing her to cast spells. Her stats can be further altered by adding either Seso (Wisdom), Sana (ATK and DEF), or Spoo (Vigor and DEF) to give even larger bonuses to her stats. Dare is replaced with the new command, Keep, where Katt forfeits a turn to be able to attack the next round with an attack that does anywhere between 2x to 3x her normal attack damage.

When Rand is fused with Solo (Earth) and either Sana (Fire) or Seso (Water) he transforms into a small shelled rhino. Solo is always the base, but depending on whether you choose Sana or Seso will determine his stat upgrade and change his role in combat. Sana will increase most of Rand's physical attributes and make him a better front line fighter while Seso will increase his magic attributes and make him a better support/magic user in combat. Unlike the other characters, Rand retains his Wake Command.

When Nina is fused with Spoo (Wind) and Seny (Holy) she is transformed into an ornate angelic figure with a long flowing blue dress and more elegant wings. This form greatly increases Nina's magic ability with a 75% increase in Wisdom and 50% increase in AP. Her regular command is replaced with Bnsh (Banish) which allows Nina to force all non-boss enemies to flee from combat at the cost of receiving no Exp. or GP.

When fused with Sana (Fire) and Spoo (Wind), Sten transform into a large and fiery Djnn with huge gains in his ATK power and Vigor. His R.I.P. Command is replaced with Sweh (Switch) which allows Sten to change the enemies you encounter in battle, this is a great skill for searching for enemies which give better Exp. GP, or rare drops.

When merged with Seny (Holy) Jean transforms into a tall, leaner, and generally more heroic looking frog knight. Like Katt, merging him with second Shaman will increase one of his stats more than his usual bonus. Jean gets huge gains in his Wisdom and Vigor, with some modest gains in AP and ATK Power. His Jab command is replaced with the Chop command which has Jean forfeit a round to perform an attack the following round that will do extremely high damage.

Spar is unique and gains three new forms depending on the Shaman. He has the most complex bonuses of the party because of this. There are no official names for his fusion forms.

If Spar is Fused with Seso (Water) he transforms into a young girl with red hair and a giant mushroom hat with matching mushroom shoes and a grass dress. This form grants a 40% increase to Wisdom, 13% increase to ATK Power, 10% increase to DEF, 30% increase to Vigor and 35% increase to AP. If fused with both Seso and Spoo (Wind) Vigor is increased by 40% instead. If fused as Seso and Shin (Dark), then AP goes up by 55%. Spar's new special command is Spor (Spore), which casts Sweet Breath to put a group to sleep but the game rolls to see if there is a headwind, so there is a 50% chance the spell will hit all enemies and a 50% chance it will hit the whole party instead.

When Spar is fused with Solo (Earth) he takes the form of a budding seedling with feet. This form grants a Wisdom increase of 30%, ATK increase of 15%, 10% for DEF, Vigor of 55%, and 15% to AP. If the fusion is Solo and Seso (Water) then Wisdom is increased by 35% instead. His new command is Bud, which has Spar skip one turn to randomly attack the enemy for the next four rounds for 2x damage. This attack can do critical hits as well and has incredibly high damage potential.

When Spar is fused with Sana (Fire) and Shin (Dark) he transforms into a vine plant made in the shape of a serpentine dragon. This form grants a 55% increase to Wisdom, 25% increase to ATK, 10% to DEF, 45% to Vigor, and 45% increase to AP. Spar gains no new commands and simply retains Ntre (Nature). 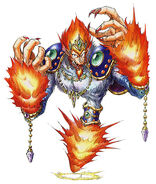 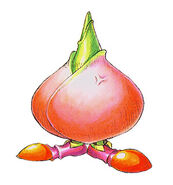 Breath of Fire III introduces the Gene system. With this Ryu can mix and match genes he finds to create different dragon forms. One specific Dragon Gene is the Fusion Gene which allows Ryu to fuse with party members to create unique Dragon forms called Hybrid. Each form uses one of the party members as a base and Ryu gains many of their abilities and qualities but the form you get is dependent who you use as a base, as well as who is the players third character in your party. The player can also add specific genes to get "enhanced" versions of the Hybrid Forms that give boosts to stats, changes damage algorithms for the Breath attacks and sometimes a new ability. Failed fusion results in a Whelp.

An orange colored feathered dragon with weak physical ability and low HP but incredibly fast and powerful magic, its Breath attack is Temptation which does no damage but lowers the enemies stats. The player gets access to many of Nina's high end Magic spells. Garr or Peco need to be the secondary fusion character to get this form. Combining it with an Eldritch Gene will get the enhanced form with access to Sirocco and Myollnir, as well as a new blue color scheme.

A Steampunk mechanical dragon with high attack and defense, moderate magic and speed, and low HP. Its Breath attack is Combustion, which does Wind elemental damage to all enemies and appears like a bomb falling on enemies. Unlike most breath attacks, this one does not calculate damage based on Ryu's HP. Nina or Peco need to be the secondary fusion character. Adding the ??? Gene will grant its enhanced form which is gold in color and gives the form access to Vitalize and Ragnarok.

A plant based dragon form has high attack, defense and HP, but is the slowest Fusion form. Its unique Breath attack is Geo Breath, which does damage based on 3/8ths of Ryu's current HP. The player gets access to Peco's special breath attacks. Garr or Rei need to be the secondary fusion character. Adding Shadow Gene will grant its enhanced form which takes a gold color scheme, replaces Geo Breath with Gaea's Breath which does damage based on 1/2 of Ryu's current health, and it gains Peco's HP regeneration passive skill.

Transforms into a giant Tiger with dragon wings and horns. It has high attack power, and good HP and magic, low defense but is the fastest dragon form Ryu has access to. Its Breath attack is Tempest which does damage based on 3/8th of Ryu's current HP and the form gets access to Shadowwalk. Momo or Nina need to be the secondary fusion characters. Its enhanced form is gained by adding a Force Gem into the mix and the tiger takes on a more orange and red color palette. Tempest is replaced with Hurricane which does damage based on 1/2 of Ryu's current HP.