The Dragon Clan, alternatively known as Brood, is a race within the Breath of Fire series. The people of the dragon clan generally stay in human form but have the ability to transform into dragons. Ryu, the protagonist of the series, is often from this particular clan hence his ability to transform into a dragon. The dragon clan becomes less prominent as the games go on, and even to the point of extinction in Breath of Fire III. 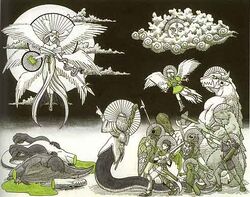 Some 2000 years before the events of the game, the Goddess Myria appeared and began offering to grant wishes to mortals. The Dragon Clan of that age warred amongst themselves for control of the Goddess's power, in the process causing terrible damage to the world - thus giving rise to the Dragons' dire reputation as agents of destruction, which is mentioned throughout the series. Although Myria was eventually sealed away, the Dragon Clan remained divided, and separated into two factions. One group, horrified at the devastation their war had wrought, chose to seal away their powers and live in peace, while a second faction preferred to continue using their abilities to further their own agendas. The former offshoot settled in Dragnier and became known as the Light Dragon Clan, while the latter group established themselves in Scande and became the Dark Dragon Clan.

When Breath of Fire begins, the Dark Dragons have established an Empire under their leader Zog, and are searching the entire world for the Goddess Keys, so that they can release Myria and have her grant their wishes. Although the Light Dragons are few in number, highly isolated, and by all appearances uninterested in going to war against their distant kinsmen, Zog still dispatches a force commanded by his second, Jade, with orders to destroy Dragnier and kill all those living there. Despite the loss of their powers and the advanced age of many of their number, the Light Dragons are still prepared to fight back against this surprise attack, but the priestess Sara instead casts a spell of temporary petrification on her kinsmen to protect them from the flames, before venturing out to face the Dark Dragons alone. She succeeds in making the Dark Dragons believe that she is the sole survivor of the attack, and is then defeated by Jade, who chooses to take Sara prisoner rather than kill her. When the petrification spell wears off, Sara's younger brother Ryu sets out to strike back against the Dark Dragons and find the truth of his sister's fate, and the game begins.

Set roughly five hundred years after the events of the first game, Breath of Fire II opens in an age when the Dragon Clan has vanished from the face of the world, leaving behind only the scattered and forgotten statues of the Dragon God to mark their passing. The only dragon still known to exist is the one that purportedly saved the town of Gate from a demon attack, several years before the events of the prologue (which is itself set perhaps a decade prior to the events of the main game), and which now sleeps upon the mountain behind the town.

As with BoF, BoF2's protagonist Ryu is a member of the Dragon Clan, but this is not made explicit until Chapter Three, when an attempted Fusion with the fire Shaman Sanamo awakens his dormant powers (burning down the shaman's cottage and surrounding woods in the process). Not long after this, the party encounters an old man living in a cave hidden behind the waterfall in the SimaFort region; although this character is never given a name, the fact that he can teach Ryu how to use his advanced Dragon forms implies that the old man is another member of the Dragon Clan (most likely one of the clan's elders, all of whom use a similar sprite). Only a few other members of the Dragon Clan are known to reside on the surface: Patty the Phantom Thief, Yua Bateson, Valerie (Ryu's and Yua's mother), otherwise known as the Sleeping Dragon of Gate and Ray Bradoc. All of these characters are first encountered early in the game (Valerie and Yua in the prologue, Patty in Chapter One, and Ray in Chapter Two), but do not have their precise links to the Dragon Clan revealed until very late in the game. Ray's heritage as a Dark Dragon is exposed in Chapter Nine, immediately before his death, while Patty's true identity is briefly hinted at in Chapter Ten, when Habalk attempts to sacrifice her to break the seal on the Gate to Infinity and she calls out for her brother to save her; she is snatched away by the Sleeping Dragon (her mother) and goes missing for the rest of the game. Valerie then sacrifices herself to break the weakening seal and give Ryu and his companions the chance to face Deathevan before the demon can reach its full power.

While descending through the depths of Infinity, the party discovers that the town of Dragnier still exists, buried far below ground. Conversation with the locals reveals that the Light and Dark Dragons reconciled in the wake of the last war against Myria, and have since been using their combined powers to wage war against Infinity's demonic hordes, keeping them locked away from the rest of the world while they await the coming of the Fated Child, who will have the power to destroy Deathevan. As previously shown with Patty and Valerie, all of the female members of the Dragon Clan now possess draconic wings in their human form.

Although Dragnier and the Dragon Clan survive the events of BoF2, they remain sealed off from the world. In the normal ending, Ryu (depending on the ending) chooses to repeat his mother's sacrifice and become the sleeping guardian of the Gate of Infinity, in anticipation of the day when Deathevan reforms. In the good ending, Ganer interrupts this attempt by crashing the flying Township onto the mountain, burying the Gate and sealing Infinity in his son's place.

Several hundred years before the events of the game take place, Myria created four Guardians from the people of Urkan Tapa, and through them communicated of the great evil that was The Brood, who if left unchecked could destroy the world. This event would be known by the Urkans and the Brood as the Great War. The Brood, although strong enough to defeat them, did not fight back. In hopes of avoiding complete annihilation of their people waiting for the chosen one, several Brood willingly gave up their power and settled into the town of Dragnier. With the exception of Jono, who secluded himself underground Dragnier, the remaining Brood who had kept their powers were slaughtered by the Guardians. By this point in history the Brood were very few in number, the death of 932 Brood at the hands of the Urkans was enough to bring them to near extinction.

Jono later informs Ryu that even before the Great War, Myria and the Brood always fought, and every time she would later return to do battle with them again. The mural underground Dragnier depicts the Ryu from Breath of Fire and his comrades fighting Myria as proof of past battles, showing that the Brood in are distant descendants of the original Dragon Clan.

The Dragon attribute is also applicable to some enemies, making weapons with the Slayer property deal additional damage.

All the gods that are referred to as Dragons are actually the Endless. When the Endless is summoned into a world and remains there indefinitely, it begins to take on the characteristics of the world and becomes a Dragon. The Dragons Ryu encounters were all summoned by the different Clans of the world and each one is linked to a particular Clan even if history has forgotten this.

Ryu and Fou-Lu are the split halves of the greatest Endless, an actual Dragon God. Though each of them is incomplete, they both have the power to transform into fearsome dragons, Their complete form has the power to change the course of the world itself.

Humans can become linked to a dragon based on their D-Rank. Those who link with a dragon are called the Chosen.

Dragons are powerful beings created by an advanced civilization to be used as weapons in their war. Their misuse led to the destruction of the world and civilization being forced underground. The dragons Odjn, Chetyre, and Dover are actually "Dragon Halves" (D-Ratio 1/2) created after the destruction to help the settlements to survive. They are based on the original Dragons (D-Ratio 1/1) and posses incredible destructive power.

Though the dragons destroyed the world, they themselves are not necessarily evil, instead it is the people who use their powers who determine if they do good or evil. The Dragons have a will of their own and seem to be nearly immortal with the ability to exist in decomposing bodies and reborn through their hosts they link with.

The Dragon Clan once again features prominently in the events of Breath of Fire 6.

Retrieved from "https://bof.fandom.com/wiki/Dragon_Clan?oldid=34854"
Community content is available under CC-BY-SA unless otherwise noted.