Chetyre is a character in Breath of Fire: Dragon Quarter.

Chetyre is a dragon who was created sometime around the destruction of the surface. He is a "Dragon Halves" (D-Ratio 1/2) who was based on the original dragons that laid waste to the surface. He links with Bosch and plots to reach the surface so he may take it for himself. Chetyre desires the sky for himself and may have a rivalry with Odjn.

Sometime ago, Chetyre linked with a human which ended poorly for his host. The arm of the Chosen was recovered and kept by BioCorp for further research. After suffering two bad losses to Ryu, Bosch finds out about the arm and has the BioCorp scientist surgically graft it to his body. Despite his high D-Ratio, the arm proves too much for Bosch and begins to slowly corrupt his body and mind. After his third defeat, Bosch loses control of his body and falls off the high platform before Ryu can save him. As he lay dying, Chetyre awakens and asks Bosch if he can hate. The two make an unspoken pact and Chetyre has his dragon arm stab Bosch in the throat to seal their agreement.

Bosch later faces Ryu for the final time at the gate to the surface. Despite his new found power, Bosch is defeated again, allowing for Chetyre to awaken and be reborn. Chetyre challenges Ryu and Odjn for control of the surface in a desperate battle of which Ryu uses his powerful Dragon Breath to overpower and destroy Chetyre once and for all.

Chetyre is the final boss battle in Dragon Qaurter, he is not a traditional boss, instead being a playable event boss. The player, in Ryu's Dragon Form, has to use Dragon Breath to break through Chetyre's barrier and later, counter Chetyre's own Dragon Breath attack. Even if the player's D-Counter reaches 100% it will not mean a Game Over  and the D-Counter may go well over 200% before the battle is over. 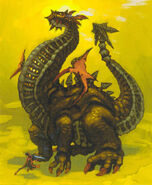 Add a photo to this gallery
Retrieved from "https://bof.fandom.com/wiki/Chetyre?oldid=27138"
Community content is available under CC-BY-SA unless otherwise noted.