Breath of Fire, also known as Breath of Fire: The Dragon Warrior (ブレスオブファイア 竜の戦士, Buresu obu Faia Ryū no Senshi?) is produced by Tokuro Fujiwara, and is the first entry in the Breath of Fire series of console role-playing games. Developed by Capcom in 1993 for the Super Famicom, it was licensed a year later by Squaresoft (now Square Enix) for release in North America. In 2001, Capcom independently porter the game for the Game Boy Advance and released it worldwide.

Breath of Fire takes place in the years following a great civil war between the Light Dragon and Dark Dragon clans. The Light Dragons are dwindling, reduced to hiding in small villages. The protagonist is Ryu, a young Light Dragon who awakens one night to find his home set on fire by Dark Dragons. After his sister is captured in the attack, Ryu sets off to rescue her. In the process, he joins a race to uncover seven mystical keys, before the Dark Dragons can use them to unlock a goddess of destruction.

Breath of Fire consists of four basic modes of gameplay: an overworld map, town and dungeon field maps, a battle screen, and a menu screen. The overworld is a scaled-down, simplified version of the game's fictional world, which the player uses to navigate between various locations. With a few plot-driven exceptions, enemies are randomly encountered while travelling though field maps or on the overworld. As the player commands the lead character to move, the other members of the travelling follow in a line behind him/her. The order of the group line can be changed at any time, allowing another character to take the lead. Most playable characters display a unique field skill outside of battle, which can only be accessed by placing them at the front. Some areas cannot be entered unless a certain character has joined; for example, the party cannot walk through forests unless Bo is at the head of the group.

The color palette of field maps changes depending on the time of day. Whenever the travelling party appears on the overworld screen, the sun rises and sets with each passing minute of real time. Non-player characters can be found milling about inside towns at daytime, whereas they will retire to their homes at night and early morning. In certain instances, the player must wait until nightfall before they can enter a given town.

The game's story develops as the player visits towns and dungeons. Townspeople offer helpful information, and some residents own item or equipment shops. Since the player's inventory space is limited, most item shops double as banks which offer to hold spare items or GP (the game's currency). Dungeons primarily appear in the form of castles, caves, and towers. Towers consist of several floors, often composed of puzzles or mazes, further complicating the party's task of reaching the top.

The menu screen is where the player makes such decisions as which characters will be in the travelling party, which equipment they wield, and the configuration of the gameplay. It is also used to track experience points and levels.

Fishing and hunting play a small role in Breath of Fire's gameplay. By outfitting Ryu with a rod and bait, the player can fish at designated spots on the overworld, often nabbing rare equipment in the process. Birds, wild boar, and deer randomly appear on the overworld. If Bo is leading the group, he can hunt animals by firing arrows at them. Once struck, the animal will change into an item (Meat) which can be then picked up. Certain types of meat restore Health Points (HP), while others refill Ability Points (AP).

During its turn-based fight sequences, Breath of Fire switches to a 3/4 isometric perspective. Up to four characters may participate in a battle, though each can be swapped out for another party member if the player so chooses. The battle screen is a detailed representation of whatever area the party is currently in, such as a desert or grassland. Although characters are miniaturized on maps, in combat their sprites are normal-sized and more realistic.

A maximum of four characters may participate in battles, although each can be swapped out for another party member at any time. Each character acts in an order dependent on their individual statistics. Players are rewarded for winning battles with experience points and GP. When characters attain a certain amount of experience points, they gain a level, which increases their statistics. Experience Points and GP are awarded based on how quickly the party dispatches the enemies with the maximum allotment being given if the player ends the battle in one round. Each party member has the option to attack, cast a magic spell, use a restorative item, or escape the fight by running away. The party can also be placed under automatic control, causing them to attack without the player's input.

The current Hit Points and Ability Points of each party member is visible from a heads-up display at the bottom of the screen, and the maximum HP and AP can be shown by pressing Select. The HP of enemies remains unseen, though a life bar measuring an enemy's health will appear whenever they take damage. An identical display appears during boss battles, but in this case, the life bar is misleading; the bar very often will drop to zero, only to see the boss acquire a 'second wind' and continue to attack without any visible HP.

At the beginning of the game, Ryu is powerless except for his sword-fighting skill. He can awaken his innate powers by visiting small, isolated shrines on the overworld known as Dragon Temples. After accepting a challenge from the monk inside, Ryu is separated from the rest of his party and pitted in a one-on-one battle against a dragon. If he wins, Ryu earns the ability to morph into various dragons during battles. Whenever this occurs Ryu's sprite is replaced with a dragon, and the strength of his attacks increases. Each set of dragon spells represent differing stages in Ryu's power: His early transformations resemble an infant dragon, while his most powerful form (Agni) takes up a large chunk of the bottom right corner of the screen.

Karn is another character who can change forms. Hidden throughout the game are four members of an ancient clan who claim to be Karn's blood relatives. Each one enables Karn to change into powerful mutant creatures by "Fusing" with Bo, Ox, and Gobi. Although this removes the fused characters from the party roster, it also grants Karn a boost in HP and overall strength. Unlike Ryu, however, Karn stays in his fused state outside of battle, and will remain so until the player commands him to revert back. 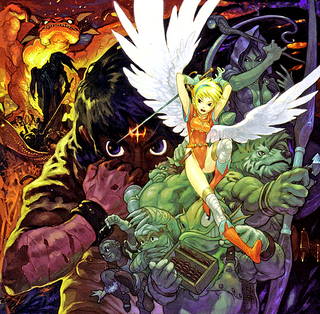 Thousands of years ago, the goddess Tyr sowed discord amongst the Dragon Clan by offering to grant any wish. Feuding over the goddess' favor eventually split the Clan into two competing factions — the Light Dragons and the Dark Dragons — who engaged in a destructive war. Tyr encouraged the fighting and watched the war escalate. Just as the world was on the brink of annihilation, the "Goddess War" ended when a heroic Light Dragon and his companions managed to imprison Tyr and seal her away with six keys. Each key has a unique magical property which effects the surrounding landscape; the Light Key is hidden in the port town of Auria, providing boundless prosperity for its residents. Alternatively, the Dark Key resides near the slums of Bleak, accounting for that town's perpetual darkness.

The Dark Dragons continue to hunt their longtime enemies, the Light Dragons, and have driven them into isolation. Unbeknownst to the Dark Dragons, the Light Dragon Clan sealed away its dragon powers long ago. The game's protagonist, Ryu, is living peacefully in a village of Light Dragons survivors. Ryu was orphaned when he was young and was raised by his sister, Sara, a priestess who can summon powerful magic. One night he dreams of a dragon that warns him of impending danger; he awakens to find his village has been set ablaze. Sara uses her magic to draw the Dark Dragons away from Ryu and the other villagers, but is taken prisoner.

The Dark Dragon Emperor, Zog, has announced that it is the birthright of the Dark Dragons to conquer the planet. Zog intends to release Tyr by assembling the six Goddess keys. Ryu leaves the village and embarks on a quest to collect the keys before Zog can.

The North American release of Breath of Fire is the product of a joint venture between Capcom and Squaresoft. At that time, Capcom had not yet attempted to localize a game which relied so heavily on text. In addition, the company had already begun work on Breath of Fire II. The task of localizing Breath of Fire was therefore handed over to Squaresoft, a company with more experience at translating Japanese role-playing games to English. Squaresoft released Breath of Fire in lieu of Final Fantasy V, which was not ported to American video game consoles until 1999.

Ironically, Breath of Fire's lackluster translation is an oft-cited criticism of the game. The English port also saw several name alterations, though some of these — in the case of the main characters — were necessitated by technical restrictions of only four letters per name (e.g. "Giliam" is shortened to "Bo"). Similarly, the names of inventory items are limited to five letters (LtKey, F.Stn, WtrJr, etc).

For the English localization, Karn's appearance was altered to give him Caucasian skin and brown hair. This was also edited in the re-release on Gameboy Advance.

Breath of Fire was ported and re-released by Capcom in Japan on July 6, in North America on December 13, and in Europe on December 14, 2001 for the Nintendo Game Boy Advance. It includes additional illustrated cutscenes, new character portraits, and adjustments to the game's overall difficulty. The menu icons that appear during battle sequences were replaced by a text-driven interface, similar to that of Breath of Fire II. The ability to "dash" by holding the B button was also included. As an added feature, players can utilize a link cable and swap items from their inventories. The re-release met with generally positive reviews; GameSpot and IGN both praised it for being a smooth conversion of the original game, though some have noted that the sound quality is lacking.

A direct port of the original game was also released on the Nintendo Switch's SNES Online.

US SNES Breath of Fire boxart. 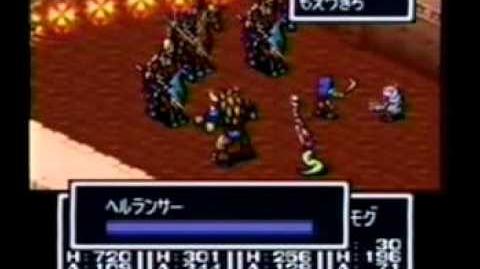 Retrieved from "https://bof.fandom.com/wiki/Breath_of_Fire?oldid=37129"
Community content is available under CC-BY-SA unless otherwise noted.