Bando is a location within Breath of Fire II. It is one of the chapels of the St. Eva Church. Its congregation is led by Father Manson.

At first, for all intents and purposes, appears to be a normal church in session. Some oddities are that there is a Nun walking, and two Paladins standing watch.

Spoiler warning: Details of plots, secrets and/or endings may follow.
After joining forces with Tiga, Ryu and his comrades reach Bando to further their rebellion. However, when they enter the church, they find it deserted, with the Father nowhere to be seen. The party walks about in the main altar room and on talking to Tiga, he laments about the party not being able to assist in causing damage, Katt comments that the entire mission was very uneventful and boring, and proceeds to smash the altar. This reveals a secret passage, much to the surprise of everyone present. Tiga, being claustrophobic, requests the party to venture in and survey what lay within. The party enters, and finds the floor littered with bones and the passageway infested with undead. A Footman step out from behind the corners of the walls and engage the party, slowing them down. They also glimpse the Father, who had been hiding there, run further in at their sight. The party then comes upon a room with sliding walls, where they discover people being locked up till they are driven insane by the haunted aura of the place. Travelling further, the party comes to a room with a platform and some sombre statues, with Manson at the centre. On approaching him, Manson reveals that Bando was used to convert detractors of the Church into its fervent followers, and using their prayers to feed Deathevan. Manson proceeds to transform into a hideous demon, and throws three Zombies at the party. After they are defeated, Manson transforms into Necroman and attacks the party himself, but is slain at the hands of the party.

Defeating Manson earns the party the key item Road to Evrai, which grants the party to enter and leave Evrai as and when they please. They party is then allowed to exit the dungeon.

Upon their exit, the party learns about their future plan of action, and prepare for the attack on Evrai.

The Holy Shaman Seny appears in the first room linked to the room with sliding walls after the destruction of Evrai, should the party not find her the first time by extending the corridor beyond the first 5 rooms. 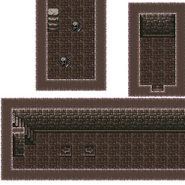 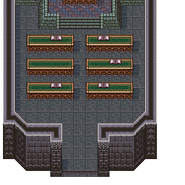 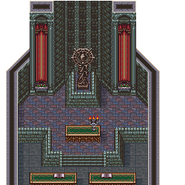 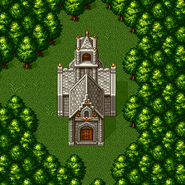 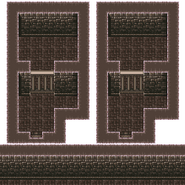 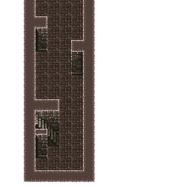 Add a photo to this gallery
Retrieved from "https://bof.fandom.com/wiki/Bando?oldid=36279"
Community content is available under CC-BY-SA unless otherwise noted.